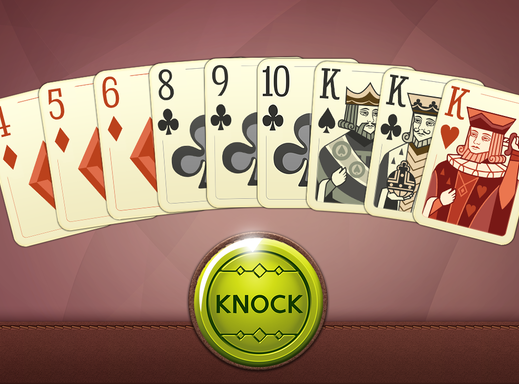 We'll show you how it's done so you can use it in your next game!

The standard game of Gin Rummy is played until one of the players reaches a Deadwood count of 10 points or less. Usually, you would need to form three combinations to reach a Deadwood count that is low enough to knock. However, it is possible to knock with only two combinations. This tactic is called the “third spread”.

You can reach a “third spread” by collecting two, three, or four cards of low value that equal 10 points or less, while forming two more combinations with the remaining six cards.

For example, say you have been dealt the hand in the picture below at the beginning of the game, and the 3-of-Hearts is face-up on the discard pile:

Though the probability of using the Ace, 2, or 4 for a combination is low, you should keep them in your hand and pick-up the 3-of-Hearts to try for a “third spread”. This way, your four lowest cards add up to a value of 10, meaning you only need to form two combinations for a quick knock. The Jack-of-Spades is useless since you already have a set of Kings, and it amounts to 10 points of Deadwood on its own, so it should be discarded. Now, if you receive the 7-of-Diamonds, the 7-of-Clubs, the 5-of-Hearts, or the 8-of-Hearts you will be able to knock very early.

Here is another example. Say you had the following 11 cards in your hand early in the game:

With a full set of Queens and a 6-7-8 series of Diamonds, you are in a great position. Waiting for another 9 to try to go Gin2 seems attractive, but that’s somewhat risky. If you instead discard one of the 9s, you now have the chance to pick up any Ace, 2, 3, or 4 on your next turn. Your Deadwood would then equal 10 or less after discarding the second 9, and you would form a “third spread”.

Let us know in the comments section of Grand Gin Rummy Facebook page what you think about this playing strategy, or share your own tips. Have fun and keep playing!