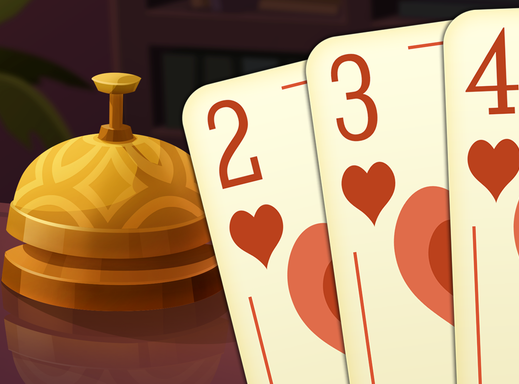 Get acquainted with the basics and see what makes this gin rummy card game so fun!

Welcome to the Grand Gin Rummy Hotel! I’m Robert, the bellboy here at the hotel, and I’m here to explain how you play Grand Gin Rummy. If you’d rather watch the game rules in action, we have a really great tutorial in the game. You can download it for free in the Apple and Google Play app stores.

Let’s start with the basics. Aces always equal 1 and face cards (jacks, queens, and kings) always equal 10 points. All other cards equal the number on the card: 2s are two points, 3s are three points, and so on.

The object of the game is to form groups of cards called “melds”.

They can either form sets of the same number or sequences of consecutive numbers in the same suit.

Each player is dealt 10 cards at the start of a game. Any cards in your hand that are unmatched (not in melds) are called deadwood. You want to have as little deadwood as possible.

The remaining cards in the deck are placed face-down and become the stock pile.

One card is then placed face-up to form the discard pile.

Once you have 10 points or less of deadwood, you can knock to end the round. In Grand Gin Rummy, a green knock button will appear.

If you have more points of deadwood than your opponent after you knock, you get undercut and your opponent gets the points plus 25 bonus points! In Grand Gin Rummy, you also get 15 bonus points just for winning a hand. This makes the game move a little quicker.

If you match 10 out of 11 cards after the draw phase, you've achieved gin and you will receive 25 bonus points.

If all 11 cards form melds prior to knocking, you've achieved big gin. For this, you are awarded 50 bonus points.

If no one knocks or goes gin by the time there are only two cards left in the stock pile, then the hand ends in a tie, and the dealer re-deals.The first player to reach 100 points wins the game.

Now that you know the basics, maybe you want to learn some more advanced tactics! Check out our introduction to offensive combinations.